Can the current international concert pitch of music somehow be improved to create a more resonant and pleasant positive experience for both the musician and the listener? Can that change be more resonant based on observations of geometry and mathematical patterns found in nature? 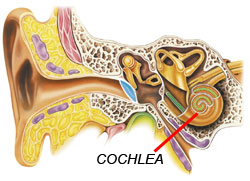 To answer these important questions we first must look at natural design and how we can apply that to music. Our inner ear for example works on the basis of Phi dampening. The waters of our inner ears rely on Fibonacci spiral dampening through the seashell like structure of the cochlea to keep us feeling balanced, centred or grounded. This Fibonacci spiral shape helps cancel out certain inertial standing wave interference patterns just like a Helmholtz resonator in order to keep us properly balanced with the natural environment around us. When the inner ear is in stress we can experience a type of “fog like” condition or feel “spaced out”.
Let us examine what Chas Stoddard has to say in “A Short History of Tuning and Temperament” about the inner ear and its spiral shape…

“An interesting consideration is the phenomenon of the octave. Why is it, when we consider the audible frequency range from 20 Hz to 20 KHz, we perceive a series of points along this scale that we can consider as having the same “quality” while patently being a different note? Part of the explanation may be that if we take a bi-lateral cross section through the cochlea, that part of the ear’s mechanism responsible for converting acoustic energy into electrical impulses, it reveals a spiral shape which can be described mathematically by a Fibonacci Series; the same maths govern the principles of the harmonic series. Neuro-pathology of the ear shows that octaves are decoded at the same point in each layer of the spiral. Some experts maintain that if the cochlea was a straight cone, rather than a tightly-wound spiral, we would have no perception of the octave at all; all we would hear would be a series of successively rising tones.” -Chas Stoddard, “A Short History of Tuning and Temperament”

The natural Phi spiral shape of the cochlea can be found planet wide in a majority natural organic based life.
DNA in its measurements of 34 by 21 angstroms suggests golden mean or Fibonacci structure. DNA can oscillate to protect itself from dissonant interference patterns of mechanical and electromagnetic waves. I propose that equal temperament and tunings of higher pitch may possibly effect DNA as DNA resonates the language of music and not syntax binary. More study needs to be done in this area by academic and independent researchers as according to Bruce Lipton, the biological functions of DNA can be affected in positive or negative ways.

According to the Scottish composer Stuart Mitchell DNA is a cosmic musical score operating triplets of rhythm at over 3000 beats per minute.
Truly all frequencies affect DNA and consciousness and DNA responds to the environment both local and non-local. No one frequency can be claimed be a magic one and only healing frequency, as we exist as an infinite universal medium of dimension. The “New Age” terms of 3D 4D 5D is completely a misnomer of true multi-dimension.
Changing frequency may also change the electric potential of the brain which may alter and affect memory and perception by the slight change and charge within the water in our cells.
This is perhaps why A=440Hz ET and higher concert pitches can be perceived as a brighter, thinner, outward of the head, whereas concert pitch at A=432Hz 12T5 or C=256Hz can be perceived as an inward experience of feeling. Our heart has more morphogenetic fields than the brain and is one of the first things to form in the womb, beating out the soliton pulse of cosmic musical DNA. We feel our emotional bodies from the heart and our solar plexus is the nerve cluster that senses those feelings like a microphone or transducer.
From my own observations, some of the harmonic overtone partials of A=432hz 12T5 appear to line up to natural patterns and also the resonance of solitons. Solitons need a specific range to form into the realm of density and span from the micro to the macro cosmos. Solitons are not only found in water mechanics, but also in the ion-acoustic breath between electrons and protons.

THE ALCHEMY OF SATURN AND 432 ALIGNMENT

A measured phenomenon of effect that may support the idea of using A=432hz and 256Hz as a scientific concert pitch is also based on the amount of partials of A=432Hz from a musical scale that seem to correlate to organic systems and the measurement of planetary movement, the Sun and Saturn for example. Saturn is one of the solar systems accurate time pieces and it orbits the procession ever 864 of its years (432 x 2).
Fulcanelli, the mysterious french master alchemist who wrote ‘Le Mystère des Cathédrales’ had this to say about Saturn when he deciphered the planetary cyclic cross at Hendaye: “…Saturn, because it is at the greatest distance from the sun of all the visible planets, has the longest “year,” taking a little less than 30 years to complete one circuit of the zodiac. This makes it the best precessional timekeeper of all the planets.
Saturn completes one precessional Great Year of 25,920 years every 864 of its “years,” a half cycle every 432 of its “years,” a quarter cycle every 216 of its “years,” and an eighth of a cycle every 108 of its “years.” This equals (108 x 30) 3240 years, or 45 degrees of precessional arc. We can continue counting in Saturn years down to 9, one 96th of the precessional year, or 3.75 degrees of arc and 270 earth years, which brings us to the alignment period of the galactic meridian and the zenith/nadir axis.
If we note when Saturn fell on a significant marker, such as the galactic center or antipode, then we can simply count Saturn cycles to mark the span of the Great Precessional Year. In this way, we could determine that if Saturn fell on the galactic antipode and made a station (since the earth is moving faster than Saturn, it appears as if it is overtaken, making it appear to stand still in the sky to mark the moment), then 432 Saturn cycles ago it was making a station at the same location, and would be doing so again at the completion of 864 Saturn cycles.” -Fulcanelli -open internet source.